Doctor Strange in the Multiverse of Madness 3D 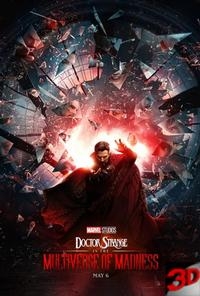 DOCTOR STRANGE IN THE MULTIVERSE OF MADNESS contains several sequences with flashing lights that may affect those who are susceptible to photosensitive epilepsy or have other photosensitivities.

To restore a world where everything is changing, Strange seeks help from his ally Wong, the Sorcerer Supreme, and the Avengers’ most powerful Scarlet Witch, Wanda. But a terrible threat looms over humanity and the entire universe that no longer can be done by their power alone. Even more surprising, the greatest threat in the universe looks exactly like Doctor Strange…

RATING REASON: for intense sequences of violence and action, frightening images and some language min
About Film Ratings