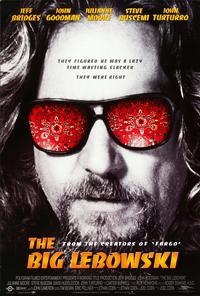 R
Jeff "The Dude" Lebowski returns home only to be roughed up by two thugs claiming to be collecting money that Lebowski's wife owes a man named Jackie Treehorn. After beating him and peeing on his rug, they realize they are looking for a different person with the same name, and they leave. The Dude discusses the situation with his bowling friends, the timid Donny (Buscemi) and the aggressive Walter (Goodman). At the instigation of Walter, The Dude decides to seek compensation for the rug from the other Jeffrey Lebowski. The next day, the titular "Big" Lebowski, a wheelchair-bound millionaire, refuses The Dude's request. The Dude meets Bunny Lebowski (Reid), the Big Lebowski's nymphomaniac trophy wife, while leaving the premises with a rug taken from the mansion.